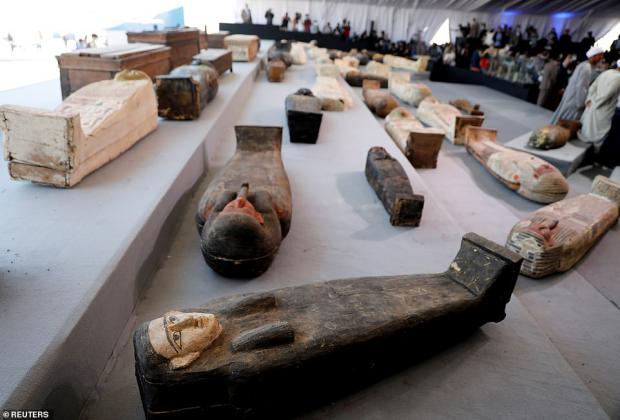 Egyptian antiquities officials on Saturday announced the discovery of at least 100 ancient coffins, some with mummies inside, and around 40 gilded statues in a vast Pharaonic necropolis south of Cairo.

The colourful, sealed sarcophagi and statues that were buried more than 2,500 years ago were displayed in a makeshift exhibit at the feet of the famed Step Pyramid of Djoser at Saqqara.

The sealed wooden coffins, unveiled on site amid much fanfare, belonged to top officials of the Late Period and the Ptolemaic period of ancient Egypt.

They were found in three burial shafts at depths of 40 feet the sweeping necropolis, that were once Egypt's ancient capital of Memphis.

Archaeologists opened a coffin with a well-preserved mummy wrapped in cloth inside.

They also carried out X-raying visualising the structures of the ancient mummy, showing how the body had been preserved.

Tourism and Antiquities Minister Khaled el-Anany told a news conference that the discovered items date back to the Ptolemaic dynasty.

'Saqqara has yet to reveal all of its contents. It is a treasure,' el-Anany said at the unveiling ceremony.

'Excavations are still underway. Whenever we empty a burial shaft of sarcophagi, we find an entrance to another.'