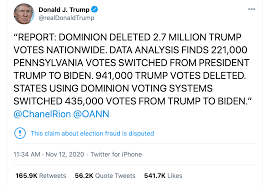 Suddenly the Trump team is ramping up the claims and the confidence. Donald Trump has declared  that 2.7 million votes were switched by Dominion electronic machines and Rudy Guliani has hinted that there are whistleblowers coming forward from Dominion. If so, that changes everything. But at this stage, they are just hints.

North Carolina has been added to the Trump Tally.

Huge claims being made about massive electronic voter fraud.

@SidneyPowell: This is massive voter fraud. It is a feature built into the system by the companies that own the machines and software. This was a deliberate attack on our country and the most important of rights held by citizens in our Republic.

@RudyGiuliani:  The evidence of fraud is pouring in at an overwhelming pac'e. This was a massive effort by Crooked Democrats to wipe out the vote of those they believe are inferior to them….DEPLORABLES , CHUMPS.

@Donald J Trump Jnr:   I guess Stalin was right… it's who counts the votes that matters.