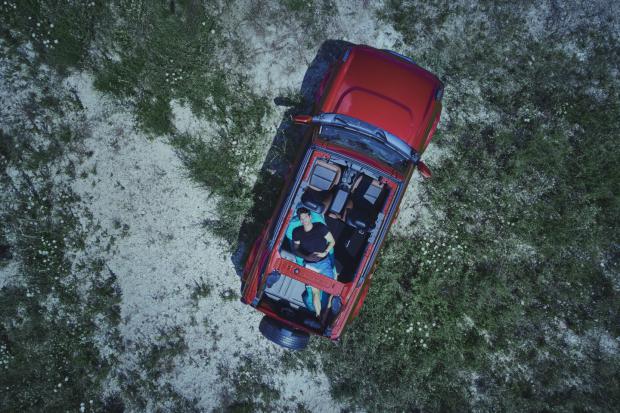 Following up on the Bronco Sport camper and Bronco overland concept, Ford reveals how suitable the standard Bronco four-door's interior is for spending the night, fully sheltered or under the sparkling night sky. Fold down the seats and you have a camper van-size lying area for bedding down.

If there was any doubt that the Bronco would make a great overlander and mini-camper, Ford tried to put it to rest on Friday, releasing an official announcement and fact sheet about the four-door's baked-in camping capability.

"We spent a lot of time engaging in the outdoors with off-road enthusiasts and understood Bronco had to elevate the off-road camping experience with cleverness and comfort," explains Bill Mangan, Bronco chief interior designer. "So we made sure our four-door models could accommodate in-car camping and we followed it with best-in-class overall openness with the top removed so campers can enjoy spectacular nighttime views."

We bet at least a few future buyers have wondered if the Bronco four-door would be able to sleep a camping solo or duo in back, and Ford answers that question with hard specs. Fold the rear seats flat and push the front seats forward, and the Bronco has 78 inches (198 cm) of length in back with the tailgate closed, the company says. Incidentally, that's a recognizable length shared with innumerable camper mattresses that readily accommodate average-height adults.

You might not want to press your luck if you happen to stand all of or close to 78 in (6' 6") tall, though, because that'll mean you're wedged tightly between the front seat back and tailgate, or forced to otherwise bend and twist to fit. You can, however, sleep alone, gaining up to an extra foot (30 cm) of length by lying diagonally. Or you can deploy the available slide-out tailgate extension (also a handy worktop for the campsite) and have 93 in (236 cm) of indoor/outdoor length on which to lie straight and up to 105 in (267 cm) when lying diagonally.