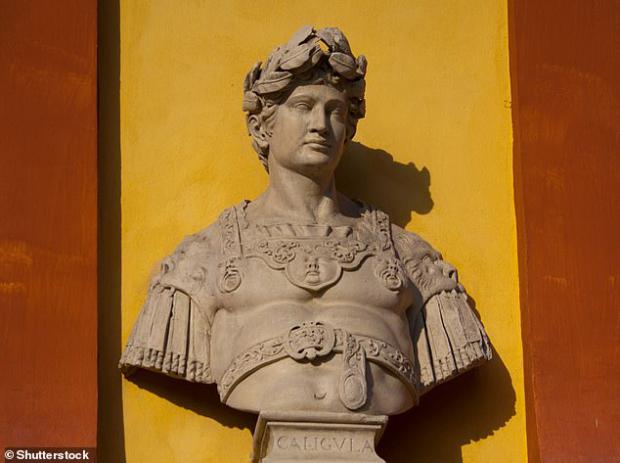 Italian researchers who excavated the site found a luxury palace with an ornate garden complete with water fountains and an exotic menagerie that housed ostriches, deer and even a bear.

Artefacts taken from the site, including jewels, coins, animal bones and a metal brooch belonging to an imperial guard, are set to go on public display.

Caligula, the third leader of the Roman Empire, lived a depraved lifestyle, indulging in brazen affairs with wives of his allies and incestuous relationships with his sisters before his murder in AD 41.

The remains lie under the offices of Enpam, a doctors' pension institute along Piazza Vittorio Emanuele II - a piazza in south-eastern central Rome.

It's in the area of Esquiline Hill – one of the Seven Hills of Rome upon which the city was originally built.

'The remains tell incredible stories, starting from the animals,' Dr Mirella Serlorenzi at the Ministry of Cultural Heritage and Activities told the Times.

'We have found bones from the foot of a lion, the tooth of a bear, and bones of ostriches and deer.

'We can imagine animals running free in this enchanted landscape, but also wild animals that were used for the private circus games of the emperor.'

The team also uncovered seeds of imported exotic plants, as well as remains of a white marble staircase that linked different levels of the garden.