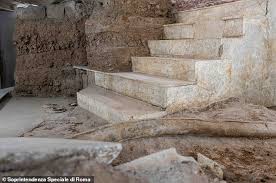 Remains of a lavish home and garden occupied by the indulgent Emperor Caligula have been discovered under an office building in central Rome.

Italian researchers who excavated the site found a luxury palace with an ornate garden complete with water fountains and an exotic menagerie that housed ostriches, deer and even a bear.

Artefacts taken from the site, including jewels, coins, animal bones and a metal brooch belonging to an imperial guard, are set to go on public display.

Caligula, the third leader of the Roman Empire, lived a depraved lifestyle, indulging in brazen affairs with wives of his allies and incestuous relationships with his sisters before his murder in AD 41.

Mysterious painting of a PIG dating back 45,500 years is found