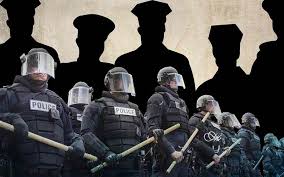 "Anyone who cares for someone with a developmental disability, as well as for disabled people themselves [lives] every day in fear that their behavior will be misconstrued as suspicious, intoxicated or hostile by law enforcement."—Steve Silberman, The New York Times

They shot at him fourteen times.

Walter Wallace Jr.—a troubled 27-year-old black man with a criminal history and mental health issues—was no saint. Still, he didn't deserve to die in a hail of bullets fired by two police officers who clearly had not been adequately trained in how to de-escalate encounters with special needs individuals.

Wallace wasn't unarmed—he was reportedly holding a knife when police confronted him—yet neither cop attempted to use non-lethal weapons on Wallace, who appeared to be in the midst of a mental health crisis. In fact, neither cop even possessed a taser. Wallace, fired upon repeatedly by both officers, was hit in the shoulder and chest and pronounced dead at the hospital.

Wallace's death is yet one more grim statistic to add to that growing list of Americans—unarmed, impaired or experiencing a mental health crisis—who have been killed by police trained to shoot first and ask questions later.

It's also a powerful reminder to think twice before you call the cops to carry out a welfare check on a loved one. Especially if that person is autistic, hearing impaired, mentally ill, elderly, suffering from dementia, disabled or might have a condition that hinders their ability to understand, communicate or immediately comply with an order.

Particularly if you value that person's life.

There are some things that don't change. Even as the nation grapples with the twin distractions of political theater and a viral pandemic, there are still deadlier forces at play.

This is one of them.

At a time when growing numbers of unarmed people have been shot and killed for just standing a certain way, or moving a certain way, or holding something—anything—that police could misinterpret to be a gun, or igniting some trigger-centric fear in a police officer's mind that has nothing to do with an actual threat to their safety, even the most benign encounters with police can have fatal consequences.

Unfortunately, police—trained in the worst case scenario and thus ready to shoot first and ask questions later—increasingly pose a risk to anyone undergoing a mental health crisis or with special needs whose disabilities may not be immediately apparent or require more finesse than the typical freeze-or-I'll-shoot tactics employed by America's police forces.

Just last year, in fact, Gay Plack, a 57-year-old Virginia woman with bipolar disorder, was killed after two police officers—sent to do a welfare check on her—entered her home uninvited, wandered through the house shouting her name, kicked open her locked bedroom door, discovered the terrified woman hiding in a dark bathroom and wielding a small axe, and four seconds later, shot her in the stomach.