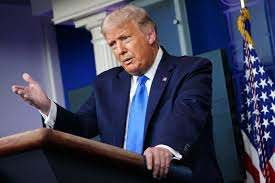 She writes to Murray:

Where are the responsible people like you who can stand up to the travesties being committed on the grab for continued power.

Trump lost the election. The American people should be treated to leadership:

There should be a peaceful transition of power.

There should be no tampering with electors for electoral college.

Creating turmoil so that a new administration is hobbled

Where are your people? Why are they not speaking out?

Give me a break.

She writes as though Democrats and the rest of the anti-Trump crowd didn't attack Trump from the day he stepped into the White House.