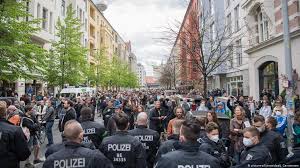 Around 190 protesters were arrested, and nine police officers were injured after clashes in central Berlin. Police said large crowds ignored repeated calls to wear face masks and practice safe social distancing - though none of the requests were followed by protesters.

"Police calling on demonstrators to leave. Lots of booing. Demonstrators want to access cordoned-off area around parliament where new additions to infection law are being debated [at the moment,]," DW's Nina Haase said.

In a series of tweets, Haase described the chaotic scene outside the Brandenburg Gate. She said demonstrators chanted, "we are the people," adding that many were singing the national anthem as they held the line.

As water cannons soaked demonstrators outside the Brandenburg Gate, riot police also moved in protesters, pushing them back away from government buildings. Twitter handle "SecondOpinion" shows the angry mob from an elevated view.