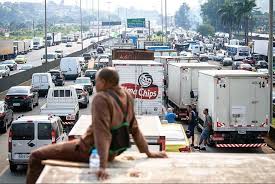 When I opened my browser and read Daisy's article about a truckers' strike threat in U.S., I felt a tightening in the chest. As the article mentions, we went precisely through that in Brazil less than three years ago. All I could think was, this is serious. And yes: it can be big. And ugly too. I'm here to tell this story. To give a heads-up about the risks, and maybe help you get prepared.

Brazil is the largest country in South America and the 5th in the world. Population 210 million, with ten cities over 1.5 million people. São Paulo alone (the biggest and richest) is 13 million souls. That is where I live, with its endless buildings, avenues, malls, parks, restaurants, traffic jams, pollution, and stress. Despite some obvious differences, I suspect someone from L.A. or N.Y. would feel quite at home here, or in Rio de Janeiro (7 million).

I mention all that to trace an important parallel

Even though the U.S. is bigger than Brazil in area (15%), population (60%), and economy (statistics vary between 8-10 times), both countries have a somewhat similar infrastructure and ground transportation model. Both are continental, urbanized nations (88% in Brazil, pretty close to U.S. 85%).

Historically, both have a logistics system largely based on roads and trucks, big and small, to transit and deliver products and goods.