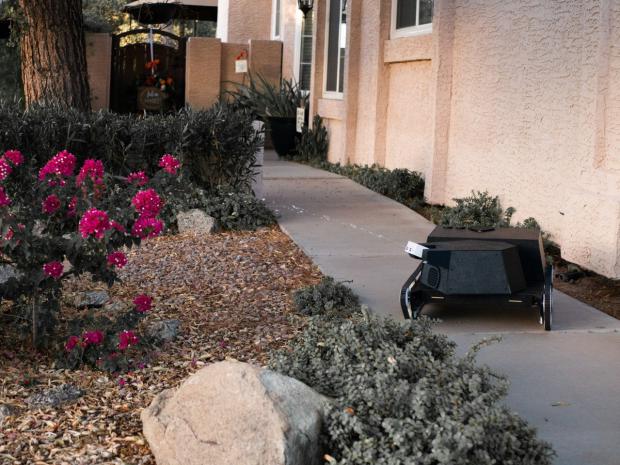 Being developed by the same people who previously brought us the Rammaxx reusable LED "fireworks," Yardroid is not unlike a miniature tank. It rolls along on tracks, with 1-liter water, herbicide and pesticide chambers in the back, lawn-mowing blades on the underside, and a gimbal-stabilized pivoting turret in the front.

That turret is in turn equipped with a video camera, LED spotlight, leaf blower, plus three separate nozzles that shoot streams of water, herbicide or pesticide.

Utilizing its onboard computer vision and artificial intelligence systems, Yardroid is reportedly capable of autonomously mowing lawns, following a route that it plans. No perimeter wires are necessary (as is the case with some other lawn-mowing robots), and the height of the cutting blades can be adjusted via an accompanying smartphone app.

And yes, it blows leaves off of sidewalks. It can additionally patrol the property at night, sending smartphone alerts and emitting an audible warning if it spots an intruder. Yardroid also records video of the suspect, and will even spray them water if they refuse to leave. Should they respond by simply stealing the robot, the owner can track its location via an onboard GPS unit.