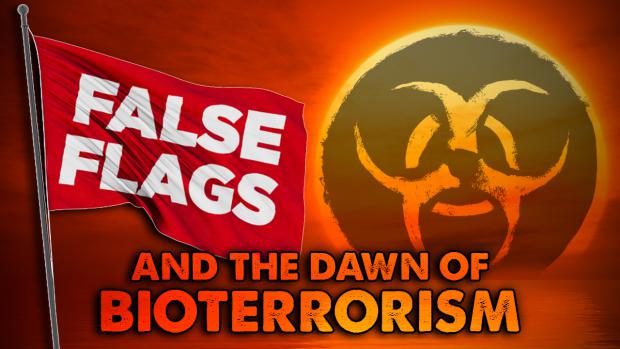 Now the stage is being set for a new spectacular attack to usher in the next stage in that war on terror: the war on bioterrorism. But who are the real bioterrorists? And can we rely on government agencies, their appointed health authorities, and the corporate media to accurately identify those terrorists in the wake of the next spectacular terror attack?

A false flag operation is an action that is carried out in such a way as to make it look like it was done by someone other than the real perpetrator. Taking its metaphor from naval warfare, where ships would sometimes fly false flags as a ruse du guerre in order to sneak up on their enemy, its use has been expanded to include military actions, intelligence operations and even political subterfuge.

It is not difficult to see how governments can use this tactic to whip the public into war hysteria against their political enemies. By staging an attack and blaming their opponents, governments can dupe their population into going along with whatever policies they wish to enact in the name of "fighting the enemy." It's a childishly simple tactic but, as we shall see, it has worked for hundreds of years to lead populations into war against targeted groups.

For the past twenty years, the world has been in the midst of a so-called "war on terror" set in motion by a false flag attack of spectacular proportions. And now, the stage is being set for a new spectacular attack to usher in the next stage in that war on terror: the war on bioterrorism.