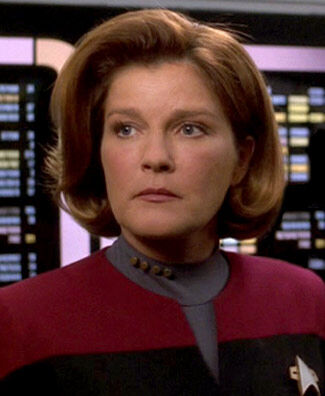 Young Ensign Janeway reports for duty in this exclusive excerpt.

This year marks the 25th anniversary of the initial broadcast launch of "Star Trek: Voyager," and the series continues to attract followers young and old to its intrepid outer space adventures and compelling cast of human and alien characters.

One of the key figures in the sci-fi series' success was actor Kate Mulgrew and her iconic portrayal of Captain Kathryn Janeway, whose struggles to achieve the respect and admiration of her crew and Starfleet resonated with audiences worldwide. Last month Nickelodeon and CBS Studios announced that Mulgrew will reprise her "Star Trek: Voyager" for Nickelodeon's upcoming kids animated series "Star Trek: Prodigy" in 2021.

To delve further into her origin story, "The Autobiography of Kathryn Janeway" (Titan Books) was recently published to chronicle her impressive career in Starfleet, from her first command to her perilous journey into the Delta Quadrant, leading to her elevation to the rank of vice-admiral — and we're fueling up a special chapter excerpt to share.

Written by Uma McCormack, this official in-universe tale explores how Janeway brought together Starfleet and the Maquis as part of her crew, forged new alliances with intergalactic species, and clashed with The Borg on their own home territory.

"Janeway is such an important figure in the history of "Star Trek" — the first woman lead, and such a strong female role model," McCormack tells Space.com. "I think people connect to her courage and her determination, and also her warmth as captain and mentor to her crew. She's thrown into an impossible situation, and she carries her people along with humor, sincerity, and grit. Not every captain would have succeeded in that situation, but Janeway does."