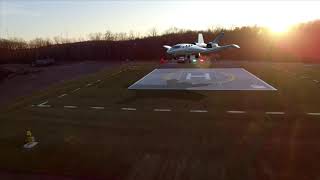 The company sees convenience and utility in the touchdown-anywhere eVTOL model, but wants to offer helicopter and business jet owners a faster, longer range alternative than electric powertrains will be able to match for some time.

So, instead of dealing with the foibles of large, heavy, low-density battery packs, the VBJ will carry a pair of turboshaft engines and a maximum of 2,040 kg (4,500 lb) of fuel. If you take off and land via a runway, that fuel can take you up to 4,400 km (2,730 miles) with an endurance of around 6.6 hours. But if you route the power instead to the four vertical lift fans embedded in its fat wings to take off and land vertically, you'll burn so much gas that you'll get slightly less than half those figures.

The tradeoff for range is the ability to put the VBJ down on a rooftop heliport, or in the middle of nowhere, or on an oil rig, or a golf course or a superyacht. With cruise speeds up to 480 mph (772 km/h), it'll run rings around helicopters and eVTOLs, with a quieter cabin in which six passengers and a pilot can hear themselves think.

Eight years into development, the Pegasus team has recently performed lift, land and hover tests with a small-scale prototype, but frankly this seems to be little more than a battery-powered drone with a body kit on it; the sort of thing a team of bright high schoolers could build, if we were to be cynical. The more interesting phase of development will be integrating those turboshafts and configuring the flight control system to handle the complex transitions between hover and cruise, and from cruise back down to hover speeds across a range of weather conditions.