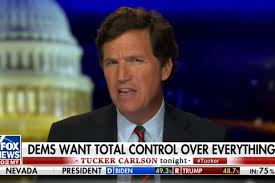 Having seen Tucker's Monday monologue, though, I am glad that I stuck to my guns by sticking to Tucker. Tucker excoriates the real fraud in the 2020 election, which was the way the media and Big Tech manipulated the system to destroy Trump.

It's hard to explain to people who came of age during the Trump era how differently the establishment treated his presidency. Even when the media loathed presidents – as they did with Nixon and Reagan – they at least went through the motions of showing respect.

With Trump, the media's hate-fest is unbounded.

If they're not making Hitler analogies, you have Anderson Cooper calling the President of the United States an "obese turtle on his back flailing in the hot sun." Stay classy, Anderson! Where's that sophisticated guy who got drunk and talked about his mother's sex life on air?

At the end of the day, what the media have done for the past four years is inane, shallow, vulgar, and mean-spirited to the point of evil, but the steady drumbeat works.

Although it's hard to remember, before Trump came along, the media would at least occasionally report rather objectively about actual news, both foreign and domestic. Nowadays, the news is blatantly slanted in whatever direction benefits Democrats.