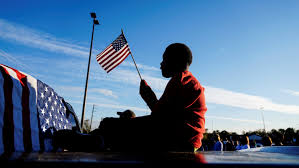 Fox News host Tucker Carlson has urged Republicans not to 'sit out' the Senate runoff races in Georgia, responding to threats from conservative voters to boycott the election to support President Donald Trump's claims of fraud.

'The problem is, the rest of us should not be punished,' he argued. 'So before you decide to sit this one out, you should think about what this might mean.'

Implicit in Carlson's monologue was a concession that President-elect Joe Biden will take office in January. Republicans currently hold a 50-48 edge in the Senate, meaning that if both Georgia seats flipped Democrat, a Vice President Kamala Harris would cast the tie-breaking vote.

Carlson described what he views as the risks of a Democrat-led Senate controlled by 'Senate Majority Leader Chuck Schumer.'

'If Democrats take full control, the first priority will be to pass something called the HEROES Act. You're told that's a coronavirus economic relief package, and there's some of that in there, but there's a lot more,' he said.

Carlson said the bill contains 'a bunch of policies that will, and this is the point of them, create a permanent Democratic majority,' including a measure to 'legalize ballot harvesting.'