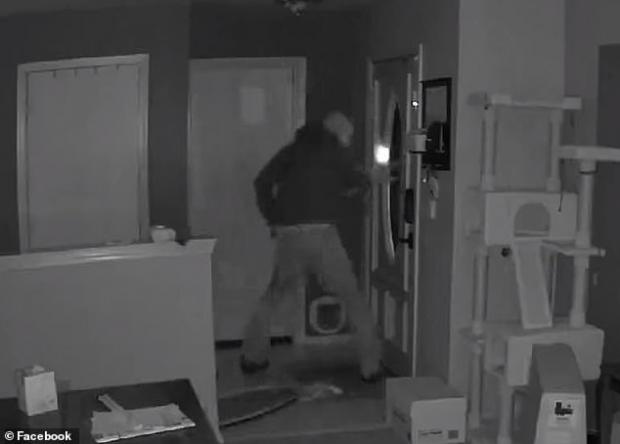 A quick-thinking Washington state father turned the tables on an intruder who used a shovel to break into a family's home over the weekend, in a terrifying incident that was captured on the homeowner's surveillance system.

Joey Archer, his wife, Beth, and the couple's young daughters were asleep in their home in Rainier, Washington, on Saturday, when they were awakened by a stranger ringing their doorbell at 6.30am.

'I yelled through the door for him to go out to the gate and I would get dressed and come out to speak with him,' Joey later recounted in a social media post. 'In this process Beth pulled up our cameras and realized the someone had slipped her car into gear, and rolled it out of the driveway, and was in the process of breaking in my car with a shovel.'

Video from the family's 20 security cameras showed the bearded intruder enter the family's barn, then use a shovel from the bed of a parked pickup truck to smash the driver's window and climb inside.

Meanwhile, the homeowner called the police and kept his eye on the perpetrator as he waited for officers to arrive.

'At that time the person took the shovel and began smashing it against the glass on the front door,' Joey wrote.

Determined to prevent the stranger from entering his house, Joey managed to wrest the shovel out of the suspect's hands through the damaged door and strike him with it twice.