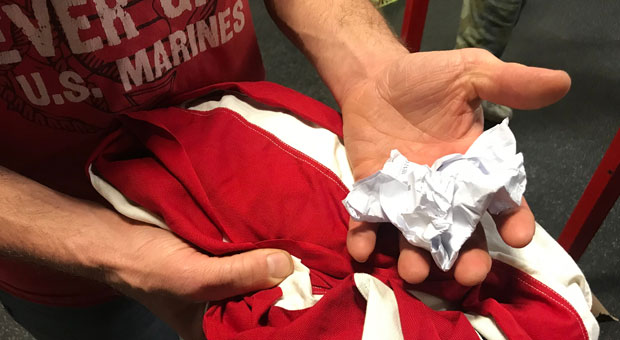 Dinero got hit with the extraordinarily hefty fine following a confrontation in which roughly 50 business owners attending a meeting inside the gym refused to allow a pair of sheriffs and a health inspector entry to the building without a warrant.

"They picked a fight with a Marine and a whole bunch of patriots," the gym owner said in a separate interview with WBEN, before pointing out that "The Constitution protects those rights."

New York Gym Owner Rips Up His Fine, Says He Will Not Comply

The veteran, having pointed out Cuomo's and Erie County Executive Mark C. Poloncarz six-figure taxpayer-funded salaries, challenged them to look their constituents' children in the eyes and tell them their parents' work is not "essential."

The lockdown rules, he believes, deny citizens their Constitutional right to earn a living.

Dinero then ripped up the fine on camera while supporters behind waved American flags and shouted, "We will not comply."

Last week, Dinero held a meeting with business owners inside his gym. He explained that the meeting was a protest of New York's regulations that have closed gyms, salons, and other businesses deemed nonessential.

Oddly enough, despite the state's blind eye to riots under the guise of 'protests' over the summer, authorities took issue with this particular peaceful protest. Sheriffs and the health inspector showed up and things escalated as the business owners refused to let them on the property without a proper warrant.