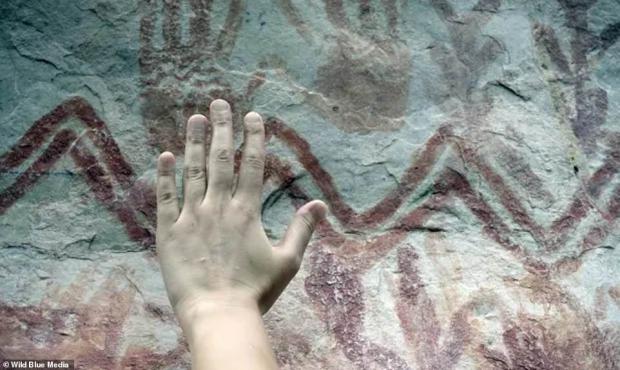 An eight-mile wall of prehistoric rock art featuring animals and humans has been discovered in the Amazonian rainforest after it was created up to 12,500 years ago.

The historical artwork, which is now being called the 'Sistine Chapel of the ancients', was uncovered on cliff faces last year in the Chiribiquete National Park, Columbia, by a British-Columbian team of archaeologists funded by the European Research Council.

The date of the paintings has been based on the portrayal of extinct animals from the ice age such as the mastodon - a prehistoric relative of the elephant which hasn't been seen in South America for at least 12,000 years.

There are also depictions of palaeolama - an extinct member of the camel family, as well as giant sloths and ice age horses.

Human handprints can also be seen. In the Amazon most native tribes are believed to be descendants of the first Siberian wave of migrants who are thought to have crossed the Bering Land Bridge up to 17,000 years ago.

During the ice age this land bridge stayed relatively untouched because snowfall was very light. It stretched for hundreds of kilometres into the continents on either side so provided a way for people to cross into different areas.

Although it is unclear exactly which tribe created the paintings, there are two main indigenous tribes of the Amazon which are believed to have been around for thousands of years - the Yanomami and the Kayapo.

The first report of the Yanomami, who live between the borders of Brazil and Venezuela, was in 1759 when a Spanish explorer found a chief of another tribe who mentioned them.