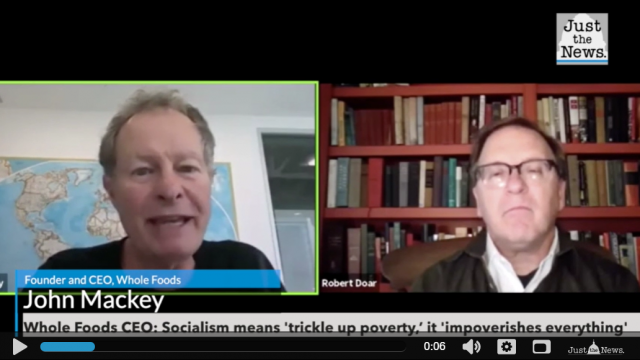 Whole Foods founder and CEO John Mackey argues that socialism is a failed system that "impoverishes everything."

Referring to the criticism of "trickle down economics," Mackey said socialism means "trickle up poverty."

"We have to recognize that some of the progressive insights are important and they shouldn't go away, but we can't throw out capitalism and replace it with socialism, that will be a disaster," he said during a discussion on Tuesday organized by the American Enterprise Institute. "Socialism has been tried 42 times in the last 100 years, and 42 failures, it doesn't work, it's the wrong way. We have to keep capitalism, I would argue, we need conscious capitalism."

Mackey said businesses and corporations in a capitalist system are often misunderstood.

"Until we get this corrected, capitalism is always going to be disdained and criticized and attacked," he said. "It'll be attacked for its motivations, because its motivations are seen as somehow impure. Yes, of course, business has to make money. If a business doesn't make money, it will fail, but that doesn't mean that its purpose is to make money."