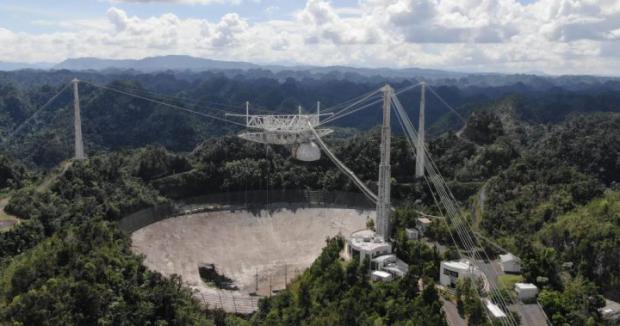 The renowned Arecibo Observatory radio telescope in Puerto Rico that has played a key role in astronomical discoveries for more than half a century has collapsed.

A cable holding up a 900-ton receiver platform snapped around 8am local time Tuesday morning and sent the massive structure hurling onto the reflector dish more than 400 feet below.

Arecibo Observatory suffered another failure in August when an auxiliary cable broke that resulted in a 100-foot gash on the 1,000-foot-wide dish and damaged the receiver platform that hung above it.

Then a main cable failed in early November that sealed the iconic telescope's fate - officials were set to shut it down after 57 years of service.

Arecibo Observatory is famous for detecting whirling pulsars, capturing geological features of Mars and helping astronomers discover the near-Earth asteroid Bennu, along with making an appearance in the 1995 James Bond film GoldenEye.

The giant telescope was also used in programs that search for extraterrestrial intelligence (SETI) because its location provided scientists access to one-third of the cosmos.

The recent collapse has left many experts stunned who had relied on what was until recently the largest radio telescope in the world.

'It sounded like a rumble. I knew exactly what it was,' said Jonathan Friedman, who worked for 26 years as a senior research associate at the observatory and still lives near it.

'I was screaming. Personally, I was out of control.... I don't have words to express it. It's a very deep, terrible feeling.'