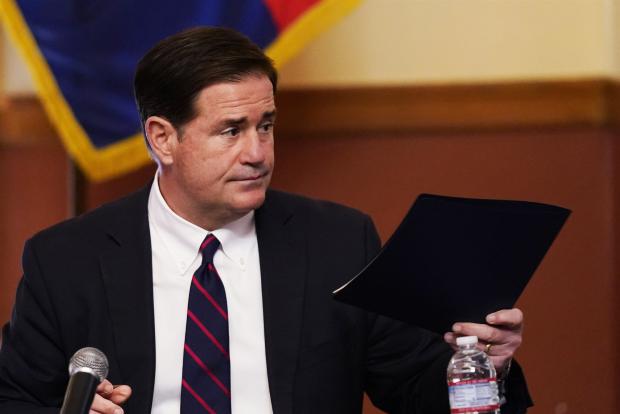 This looks like the end of a beautiful friendship.

Arizona Gov. Doug Ducey, a Republican and close ally of President Donald Trump throughout the 2020 election, found himself in the president's Twitter crosshairs on Monday when he signed off on the state's election certification. Trump tweeted that Ducey had "betrayed" the people of Arizona by not backing the president's false assertion that he'd actually won the state that he lost by over 10,000 votes.

Video footage of Ducey signing the certification shows his phone ringing to the tune of the "Hail to the Chief" during the ceremony — the ringtone he's said he uses to make sure he doesn't miss calls from the White House. Ducey muted the call.

HE'LL GET BACK TO YOU Back in July, Gov. Ducey said he changed his White House ringtone to "Hail to The Chief" so he wouldn't miss a call from Trump/Pence. Guess who called while Ducey was certifying Arizona's election? (7 secs in) pic.twitter.com/bzBGpfSIDf

Monday's back-and-forth appeared to terminate the close relationship between Trump and Ducey, who have regularly praised each other's leadership, particularly throughout the coronavirus pandemic that has ravaged Arizona and much of the country.

Their relationship started frostily: Ducey, who was first elected governor in 2014, largely stayed on the sidelines during the GOP primary in 2016, and didn't appear publicly with Trump until after he secured the Republican nomination.