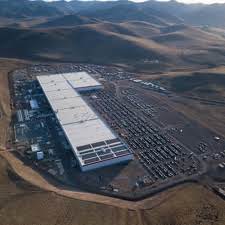 Giga factory is a term that we can first trace back to it being used by Elon Musk's Tesla. Back in the year, 2013. But why is it called a Giga factory. What is a Giga factory? Why are they so important, why is everyone talking about them?

Welcome to the Vox Network and I Speak Electric – let's find out some answers.

The name Giga factory can be split into two. You understand factory, right, so let's take on Giga. The word Giga is a unit of measurement, representing billions.

In this case, you can apply the word Watts. After, so we're talking about a  Gigawatts of power – equal to one million watts - and Giga watt-hours of energy storage.

But Giga also comes from the Greek word gigas, which means giant. So rather than saying it's a. billion of anything. Maybe it's just saying it's a giant factory.

You could even say it's simply a new word that is a very good marketing phrase that seems to have taken on a life of its own well beyond Tesla. And in fact if we'd like to trace it back to the exact point in history. When the word was first used. Our research shows that it was probably first used during an investor's call in November, 2013, when Elon musk told investors there is going to need to be some kind of Giga factory built. At the time, they were planning on their first Giga factory being comparable in size to all the other lithium-ion battery production in the world. All under one room.