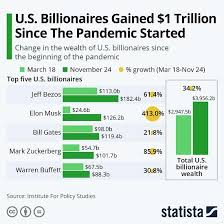 Let's keep it simple: US dollar up, stocks down. US dollar down, stocks up. Stocks up, billionaires get richer. Since that spot of bother in March 2020 when the US dollar (USD) soared and stocks cratered, the USD has been in a free-fall, boosting the wealth of America's Robber Barons and various other skimmers, scammers and other undeserving scoundrels.

Chief among the undeserving scoundrels feasting on the decline of the USD are global stock markets which have soared not because revenues and profits are soaring but because the USD has plummeted.

The Federal Reserve is widely worshiped as the Ultimate Power in the Universe, a kind of financial Death Star. The Fed has seen fit to crush the USD to further boost the wealth of billionaires and save global stock markets from their well-deserved ruin. Saving the world, ho-hum, just another day for the god-like Fed.

But something doesn't quite add up here, for as the all-powerful Fed devalues the US dollar, it destroys the exorbitant privilege of America's reserve currency. What's the exorbitant privilege? Simply this: the owner of a reserve currency can create "money" (USD) out of thin air and trade it for autos, oil, semiconductors--real-world goods that were not created out of thin air. Rather, all these real-world goods required tremendous investment and significant costs to be produced and transported.

The exorbitant privilege is something for nothing--a remarkably good deal. And yet the universal expectation is the Fed is going to throw that privilege in the dumpster by pushing the USD into the ground, first by devaluing it relative other currencies and then by letting hyper-inflation destroy what's left of its purchasing power.