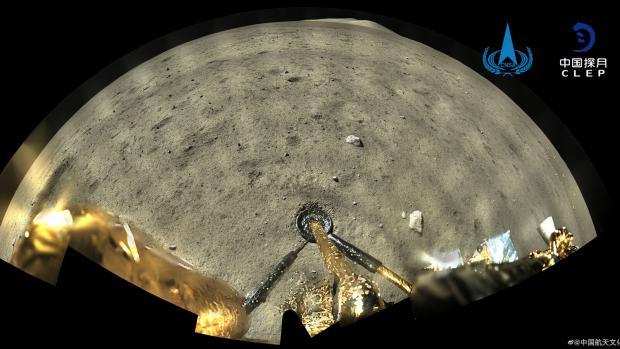 China's lunar probe Chang'e-5 has taken off from the moon to bring rock samples from the moon back to Earth for the first time in 40 years, according to the country's space authority.

Footage sent back from space shows the probe's ascender blasting off from the lander on the lunar surface.

The ascender's engine worked for around six minutes to propel the vehicle into the orbit, CLEP claimed in a social media statement.

The official agency said that the ascender did not have a mature launching system on the moon, so it had to use the lander as a 'temporary' launching pad.

The Chang'e-5 lander-ascender combination displayed a Chinese national flag before successfully separating, according to CLEP.

It added that the spacecraft had completed three stages: vertical liftoff, position changing and orbit entrance.

China's state broadcaster CCTV aired footage of the the moment the ascender took off from the moon during a late-night news show.

The ascender is due to connect with the Chang'e-5 orbit-return combination, which has been waiting in the lunar orbit, and transfer the lunar samples to the return mission.

The latter is expected to bring the materials back to earth at 'an appropriate' window of opportunity.

Beijing's space officials are yet to specify what type of samples are being sent back or how much they weigh.