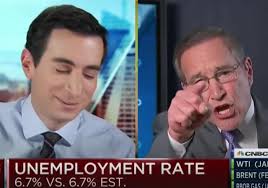 Sparks flew on CNBC Friday morning as "Squawk Box" host and NYT Dealbook editor Andrew Ross Sorkin and fixed-income correspondent Rick Santelli - who provoked a media firestorm earlier this year for (only half-seriously) suggesting that people should just infect themselves with COVID-19 and get it over with - got into one of the most heated screamfests we've seen in a while.

It all started with a pre-jobs report discussion of the worsening employment picture for America's retail workers, before things quickly took a turn for the dramatic.

"Why are those people any less safe in a restaurant with plexiglass...I think it's really sad, when we look at the services sector...that particular dynamic should be studied more," Santelli posited. "You can't tell me that shutting down...which is certainly the easiest answer...is the only answer".

A clearly galled Sorkin then launched into a patronizing diatribe about the differences between big box retailers, restaurants and churches, and why Santelli was doing viewers a "disservice" by disregarding the science"

"The difference between a big box retailer, and a restaurant - or frankly, a church - are so different it's unbelievable," Sorkin insisted.

An incredulous Santelli shot back: "500 people in a Lowes aren't any safer than 150 people in a restaurant that holds 600...and I live in an area with a lot of restaurants that have fought back...and they're open"

After some more screaming back and forth, Sorkin accused Santelli of avocating for people to go "packing into restaurants", which is not what he said.

"The Coalition for Safer Web"