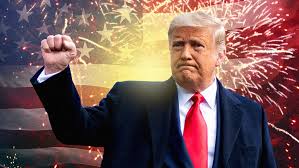 Two months remain before the next inauguration. There is much that President Trump can and should do right now. All of the actions below will set the table for a successful second term should President Trump win in court, but even if he doesn't they will stick one last finger in the eye of the corrupt elite cabal that hates him and his supporters so much.

President Trump's pardon of General Michael Flynn the day before Thanksgiving was a welcome start. But President Trump shouldn't just pardon those who took personal risks by associating with him.

Julian Assange has done everything that journalists are supposed to do, and everything which America's fake press has abandoned in favor of left-wing activism. Assange has revealed the secrets of the powerful and how they really operate. He exposed the lies of officials like James Clapper. He embarrassed Hillary Clinton and the wider Democratic party by releasing emails that revealed the party's internal corruption. For all this, he spent years under house arrest in the U.K., and now the Department of Justice is fighting to extradite him so he can spend the rest of his life in an American prison.

Trump should put an end to this. Nothing would infuriate Washington more than to see Assange a free man. That is exactly why Trump should do it.