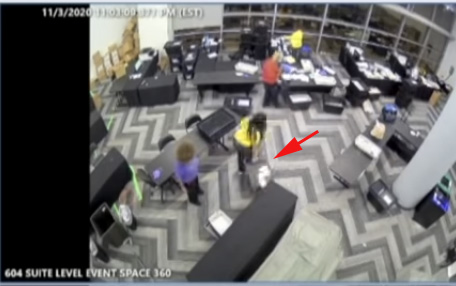 The team in State Farm Arena in Atlanta sent home observers and the press, said they'd stop counting. But then those dedicated and democratic souls decided to work on for at least two more hours during which time they pulled four suitcases out from under a table and took them to the machines and processed them all night, all captured on the CCTV. What's the penalty for fake ballots in Georgia?

At 10pm in State Farm Arena, all the other poll observers and Fox news were sent home and told the counting would resume in the morning. But after they left, a woman in a yellow shirt pulled a suitcase out at 11:02pm and took it to the counting desks.

We all know what kinds of ballots don't come in official boxes and don't need to be viewed by Republicans.

The question is — will the Democrats be able to win the Georgia Senate Runoffs if Republican poll watchers refuse to go home til the counting is finished?

The other question is — was there CCTV from all the other swing states and when can we see that too?

The same lady that set that table up at 8am in the morning was the one who sent people home.