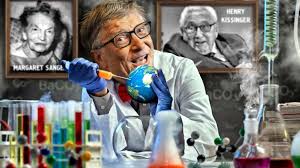 Patrick Henry, one of America's more outspoken Founding Fathers, famously remarked "give me liberty or give me death" when the life of his nation was on the line. Today, America's famous battle cry has been replaced by a masked and muffled gasp that advises, without hope of a second opinion, "give me lockdowns and keep me safe." So terrified is the American public of catching a virus that comes with a 99 percent survival rate that they are willing to forego Thanksgiving, the great national holiday commemorating – with no loss of irony – their Pilgrim ancestors' collective courage to overcome the wild, hostile conditions of their new land.

It must be said that no fascist party has ever been so adept when it came to sealing the collective fate of their people to a common enemy. That's because the threat facing mankind today, or so we are told, is not some nefarious ideology, like communism, or even a terrorist organization that the masses can be rallied to fight. Rather, the threat is a microscopic contagion that is capable of invading every nook and cranny of our lives. Already the age of manly handshakes is over, replaced by an emasculated majority, while an entire generation of youth now looks at their fellow human beings as infernal germ factories.