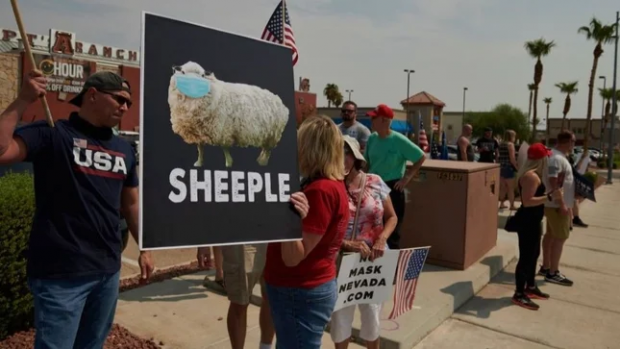 "The timid civilized world has found nothing with which to oppose the onslaught of a sudden revival of barefaced barbarity, other than concessions and smiles."

It is rather obvious that the wearing of a mask at the demand of the state has become the single signifying behavior that exposes the level of obedience to power that is necessary in order for the ruling class to gain total control. This may seem to be a simplistic analysis, and in many ways it is, but it has served as the most important gauge of the psyche of the average citizen. This gauge has been the basis of many despicable policy decisions made by the rulers and their pawns in government. If the people can be made to obey on command totally ridiculous mandates, orders that are completely illogical on their face, then they can be easily fooled into giving up their freedom. This is done through fear mongering, even in light of the fact that there is nothing to fear. It is all illusion, and therefore it is clear that it is simply a staged ploy meant to gain acquiescence from the masses, so that power can be gained and control solidified.

Just yesterday, the possible new president, Joe Biden, said he would ask all Americans to wear masks for 100 days once elected. This would serve as a federal expansion of the local mask commands to further gauge the public's obedience level, so as to better understand how far the government could push its agendas. So far, those agendas have advanced almost unimpeded, and at lightening speed, and this is set to continue. With any additional compliance by even more Americans, they would show that they were ripe for even greater and more restrictive tyranny. This sounds almost like a game. Biden told the Communist News Network (CNN) that "he believed there would be a "significant reduction" in Covid-19 cases if every American wore a face covering." This statement is asinine on its face! He also said he would order masks to be worn in all government buildings. While there is no apparent legal authority for a president to force mask wearing, the consequences of such action as threatened would certainly encourage the useless governors and all other local politicians to expand enforcement. This would serve as a recipe for much additional restriction and regulation.

Another CDC Flip-Flop: 'Put Your Mask Back On...Or Else!'