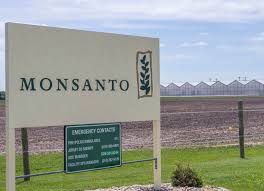 Get poisoned or get on board.

That's the choice soybean farmers such as Will Glazik face. The past few summers, farmers near Glazik's central Illinois farm have sprayed so much of the weedkiller dicamba that it has polluted the air for hours and sometimes days.

As Glazik puts it, there are two types of soybeans: Monsanto's, which are genetically engineered to withstand dicamba, and everyone else's.

Glazik's soybeans have been the damaged ones. His soybean leaves will curl up, then the plants will become smaller and weaker. He's lost as much as 40 bushels an acre in some fields, a huge loss when organic soybeans are $20 a bushel. He has to hold his breath every year to see if the damage will cause him to lose his organic certification.

His neighbors who spray dicamba are frustrated with him, he said. There's an easy solution to avoid damage, they tell him, "Buy Monsanto's seeds."