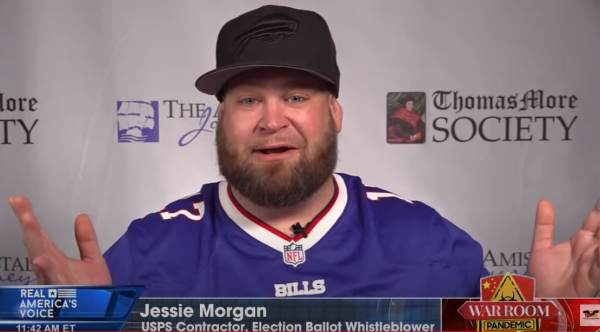 Whistleblower Jesse Morgan went on with Steve Bannon on the War Room on Tuesday morning.

Steve Bannon: Are authorities coming to you and saying, "Hey we need to sit down and interview you?" What is going on with where these ballots are and what they are used for?

Jesse Morgan: You know, it is really funny that you say that. I've been interviewed, so I had a meeting with the FBI. Somebody, the OGI or some agency from the post office and a few other people. So basically the interview, so here I am the witness basically gets kind of like interrogated I guess, you'd say. Which is cool I understand that they're doing their job. So I give them what I saw what happened to me, what I'd done. And what they wanted to do instead of focusing on the picture they wanted to focus over here and try to figure out how I came on TV. It's really sad to be honest.

Steve Bannon: Hold it, they didn't focus on the trailer that got loaded with ballots in Beth Page, New York… They wondered how people got to you and how you got on TV?