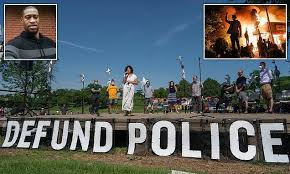 Instead, funds will be directed to violence prevention and mental health services

Since he died in police custody, violent crime rates across the city have soared

Minneapolis City Council on Thursday approved a controversial budget which is set to move $8million of funding from the police - despite record crime rates since the May death of George Floyd.

Mayor Jacob Frey, who had threatened to veto the entire budget if the council went ahead with a plan to cap police staffing, said the vote was a defining moment for the city which was the first to be hit by anti-police protests following the death of Floyd.

The city has been plagued by soaring violent crime since then - with homicide, robbery, aggravated assault, burglary, theft and arson all up on last year's figures.

Time for the people to hire their own gun patrols. Look into "Oath Keeprs." Many of them are retired police, and will train your little neighborhood watch group on how to protect yourselves.