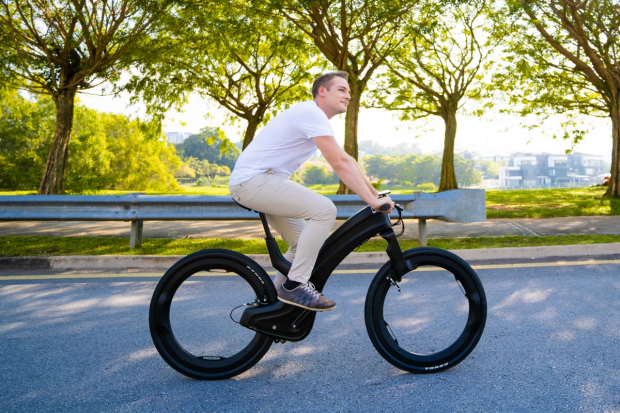 Many years, the local San Francisco politicians were looking into making special bike-powered rickshaws, so that tourists could be transported about, without the automobile exhaust emissions, that was making this city's smog problem worse. But, pedaling a rickshaw around is physically EXHAUSTING! So, to reduce the biker's fatigue, they experimented with a kind of pneumatic kinetic battery, a downhill and braking energy recycling device for the rickshaws, a special order gearworks and air pump, which compressed outside air inside of the steel tube framework of both bike and rickshaw, and then released it to help propel this green vehicle whenever it had to go fast or go uphill. Something like that, should be looked into for many models of modern E-Bikes and the like, since there is a lot of potential push in braking and downhill rolling energy. Also, when they manufacture these little flying drone, they found that they could reduce the weight of their tubular landing frames, by stuffing the inside of these tubes with tiny, hollow, glass microspheres, a physics trick, that enabled them to make it as lightweight as possible, without losing the required structure strength. Something like that might work with bikes with steel tube frameworks, only they would have to stuff the insides of these bicycle frame tubes, with small, hollow steel bubbles, which would also give the bike some additional crash impact resistance as well!

Medical Monsters On The Loose

"Holy F*ck This Person Is A Sociopath":

How nose cartilage cells are being weaponized against osteoarthritis