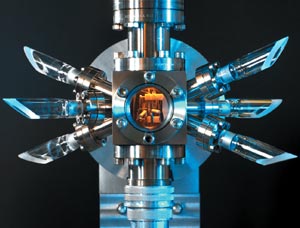 But there's always room for improvement, as researchers at MIT have now demonstrated with a new quantum-entangled atomic clock.

Atoms vibrate in such precisely reliable patterns that you could set your watch to them – and that's exactly what atomic clocks do. These timepieces use lasers to measure these oscillations, and the resulting times are accurate enough to set national and international standards. The cesium-133 atom, for instance, oscillates exactly 9,192,631,770 times per second, and it's so stable that this pattern has officially defined the second since 1968.

Now a team of MIT physicists has designed a new type of atomic clock, which could push the boundaries of precision even further. Ideally, tracking the vibrations of a single atom should keep time most accurately, but unfortunately random quantum fluctuations can mess with the measurements. This is known as the Standard Quantum Limit.

So, quantum clocks usually track a gas made up of thousands of atoms of the same type – traditionally cesium, although ytterbium is emerging as a new frontrunner in recent years. These atoms are cooled almost to absolute zero, then held in place with lasers while another laser measures their oscillations. By taking the average of many atoms, a more accurate answer can be reached.

Unfortunately, the effects of the Standard Quantum Limit may be reduced, but they can't be completely removed. The MIT team's new atomic clock reduces the effect even further, thanks to quantum entanglement.