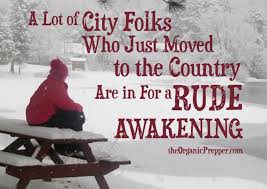 Since the beginning of the Covid pandemic and subsequent lockdowns, a lot of folks have decided that city life is no longer for them. There's been a whole new demand for rural homes as people discover it's not so fun to live in a tiny apartment with no yard, 3 children, and two parents all working from and learning from home.

However, an essay on Medium pointed out that a lot of these former urbanites may not have thought things through. Courtney Maum wrote of a scenario that many of us who have lived in the boonies can clearly imagine:

The other night, I left my house to find our cat before the coyotes did and found my brand new neighbor standing in our driveway, instead. Without any preamble, she gestured to the three cords of wood we had meticulously split, seasoned, and stacked throughout the summer. Could she have some wood?

I blinked dumbly at my neighbor, waiting for thepunchline. It is an unspoken pact in these here hills: eggs, milk, and sugar's for the taking, but you don't touch someone's wood. The kind of firewood you order in the country, when you order it, how you stack it, how you keep it dry, it's a form of parenting; it is holy ground. (source)

The piece continues with several other examples of people who moved to the country to discover they were completely unprepared.

Boy, that brought back some memories.

I remember when I moved straight from the big city to a cabin in the Algonquin Forest.

Eight years ago, I took a leap of faith (or ignorance, depending on who you ask) and relocated myself, my youngest daughter, two cats, and two dogs from a cute little house in the greater Toronto area to dirt cheap cabin in the Algonquin Forest on the shores of a spectacularly beautiful lake. (My eldest was in school in another city but visited often.)

To clarify the situation we were, in based on some of the comments that seem to be making this a story about men being irrelevant, my children's father had recently died quite suddenly and shockingly. We had to make a dramatic change, both financially and so that everything around us was not a painful memory.

The Fun In This Life: The Happiness Factor