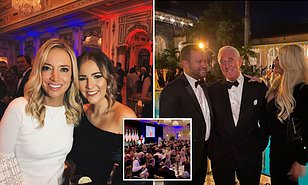 President Donald Trump's Mar-a-Lago hosted a packed, mask free ball for Turning Point USA, a pro-Trump youth group where Kayleigh McEnany, Roger Stone and the CEO of MyPillow were the stars of the night.

Turning Point USA, a popular group with conservative college students, hosts an annual conference in Palm Beach, Florida, every December, around the time President Trump leaves the White House to spend the holidays at his Mar-a-Lago private club.

President Trump addressed the group last year but he has yet to depart Washington D.C. this year as he seeks a way to overturn the results of November's presidential election.

His eldest son, Donald Trump Jr., and Kimberly Guilfoyle addressed the students as did many other conservative stars, including Fox News host Tucker Carlson and former Trump aide Sebastian Gorka.

Vice President Mike Pence is scheduled to speak with them on Tuesday, the last day of the five-day event.

The conference typically includes a posh party at the Winter White House.

Photos posted on social media show a crowded ballroom at Mar-a-Lago with nary a face mask in sight, which would be a violation of COVID-19 protocols.