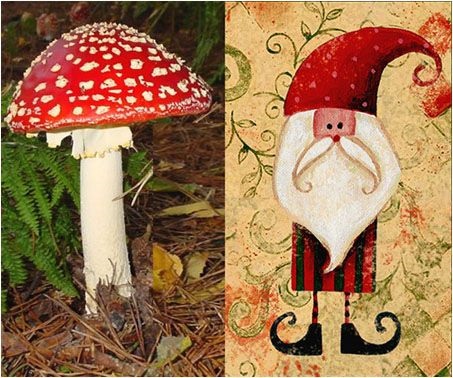 The traditions of our popular culture (Christmas, New Years, etc.) actually find their roots in early Pagan ceremonies that guide us to the closing of a chapter, to be reborn in a new year. The cultural Zeitgeist tells a story that during Christmas time we celebrate the birth of Jesus, however we are actually following astrological patterns, celebrating the balance with seasonal cycles and the precession of the equinox. This is the finite choreography of the stars, and the winter solstice is special occurrence that allows dreams to manifest in the year ahead.

While studying the origins of Christmas, specifically in relation to the Santa mythos – there has been a lot that seems to be lost in the ground that the "root" of the story takes place in. Many people have studied this, and it's been revealed that the origin of Santa is actually the spirit of the Kamchadales and the Koryak Shaman from Siberia. These Shaman wore red clothing, with white accents in homage to the Fly Agaric mushroom. This hallucinogenic mushroom can be found beneath only specific trees, like the fir or pine, which they understood as the Tree of Life. The Mushrooms are the literal "fruit" of those trees, and grow from the roots.  The Shaman would collect these fruits, and bring them to the homes of the tribe. They would dry them over the fire, or hang them on the pine tree inside their homes. This specific mushroom played an important role in their end of the year rituals, because astrologically there is something consistent and special happening. The energetic vortex of the winter solstice provided a gift that allowed humanity to connect with a higher power to gain insight.

These traditions were passed down, and found their way into the rituals of civilized societies like Denmark and Great Britain. With that, they lost an integral piece of the puzzle that was the soul of these rituals.