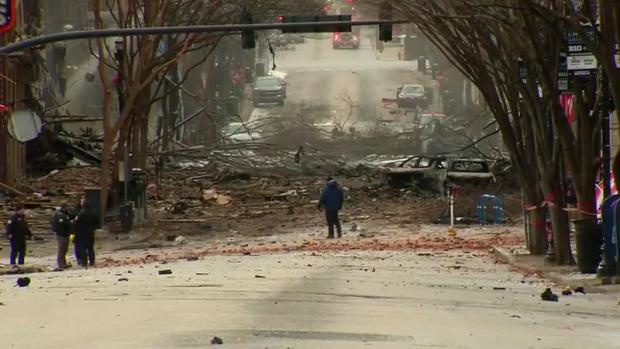 Speculation is growing that the AT&T building was intentionally targeted in the Nashville Christmas Day bombing as the FBI probes rumors that the main suspect in the attack harbored deep paranoia about 5G technology.

Police on Sunday confirmed that Anthony Quinn Warner, 63, is a person of interest in the investigation launched when an RV exploded outside Nashville's AT&T building on Friday morning, leaving three people injured and dozens of structures damaged.

At a press conference police officers described how the RV, which was covered in cameras, played an ominous warning about the impending explosion and the song 'Downtown' by Petula Clark in the minutes before the blast went off.

The explosion is thought to have been the result of a suicide bombing after it was revealed that human remains had been recovered at the scene and officials said they were not looking for another suspect.

Nashville Mayor John Cooper on Sunday said he suspects that the AT&T transmission center was targeted in the attack.

Cooper told CBS News' Face the Nation that it 'feels like there has to be some connection to the AT&T facility and the site of the bombing'.

Law enforcement sources told CBS that Warner is believed to have died in the explosion as DNA tests are performed on the remains. The outlet reported that the FBI received at least two tips about Warner prior to the blast.

WSMV Nashville said that the FBI was digging into claims that Warner was paranoid about the idea that Americans are being spied on using 5G, which could explain the location of the explosion on 2nd Avenue North. One business owner on that street said he'd spotted a similar RV parked in the area multiple times in the past few weeks, suggesting that Warner may have 'staked out' the site of the attack.