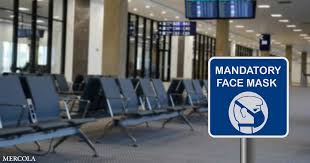 Research overwhelmingly shows face masks do not prevent the spread of viral infection in community settings. What's more, to get what little benefit you can from a mask, you have to put it on, wear and remove it properly, which young children cannot do

According to Delta Airlines CEO Ed Bastian, nearly 700 people have been placed on the company's no-fly list since May 2020 for refusing to wear a face mask

I've reviewed the science on mask wearing in several articles over the past nine months. So far, there's not been a study showing a significant benefit. On the contrary, evidence is conspicuously piled on the side of the argument that they don't protect the wearer or prevent the spread of infection in community settings.

Despite the lack of scientific basis, universal mask mandates continue to be pushed to ludicrous ends. Case in point: A family was recently booted off a United Airlines flight because the couple's 2-year-old daughter refused to wear a face mask.1

The father, Eliz Orban, spoke to Eyewitness News about the incident in their December 13, 2020, report. United Airlines issued a statement about the event, saying the company has "a multi-layered set of policies, including mandating that everyone onboard 2 and older wears a mask."

United Airlines added that "These procedures are not only backed by guidance from the CDC and our partners at the Cleveland Clinic, but they're also consistent across every major airline." The Orban family were refunded for the flight, and contrary to the couple's original video2 statement, they are not banned from future flights.

This is about as unreasonable as it can get. Not only do universal mask mandates have no scientific backing in general, but insisting that a 2-year-old wear a mask is also nonsensical for the fact that the only way to get what little benefit you can from a mask is by putting it on, wearing and removing properly.

One key way by which you negate the benefit of a mask is by touching it. Yet people are constantly fiddling with their masks as they fall down or shift on their face as they talk or move around. A young child is even more likely to contaminate the mask beyond the point of it providing any benefit whatsoever.

Importantly though, young children are insignificant disease vectors,4, 5,6,7 meaning they rarely test positive or spread the infection. This makes kicking the family off the plane all the more egregious. In truth, the smartest person in this whole affair is the baby who refused to comply.

Interestingly enough, back in May 2020, United Airlines' COVID-19 policy stressed the need to avoid confrontation. In a statement to CNN for a May 14, 2020, article on airline mask policies, United Airlines said:8

"If for some reason this policy causes a disturbance onboard, we've counseled our flight attendants to use their de-escalation skills, and they do have the flexibility to reseat customers on the aircraft as needed."

Apparently, the flight attendant in this case disregarded such solutions and chose the most traumatic path in dealing with the Orbans instead. Incidentally, while the Orbans are apparently being allowed to fly United Airlines in the future, the company does have a policy that calls for the permanent suspension of noncompliant passengers, according to Forbes.9

The Orbans aren't the first to be kicked off a flight over a mask dispute. According to Delta Airlines CEO Ed Bastian, nearly 700 people have been placed on the company's no-fly list since May 2020 for refusing to wear a face mask.10 The Orbans also aren't' the first to be booted because of an uncompliant child.

September 14, 2020, CNN reported11 that Jodi Degyansky and her 2-year-old son were asked to de-board a Southwestern Airlines flight because her son had his mask pulled under his chin while eating some gummy bears. A flight attendant told Degyansky that families with small children shirk the company's mask policy by eating throughout the entire flight.