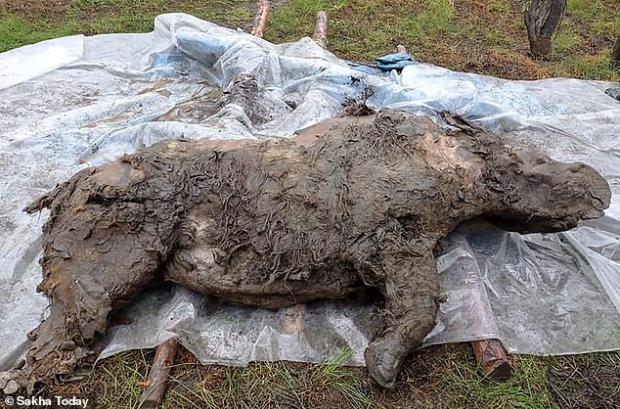 The frozen carcass of a juvenile woolly rhinoceros from the Ice Age — with its hazel-coloured coat still intact — has been recovered from the permafrost of Siberia.

The remains — which are 80 per cent intact and contain evidence of the animal's last meal — were excavated in the Abyysky district of the Sakha Republic in August.

They were found by local resident Alexei Savvin — and include various internal organs and structures, including teeth, part of the intestines and a lump of fat.

Experts believe that the remains are most likely some 34,000 years old — although its exact age is yet to be confirmed by radiocarbon dating.

The find was made close to the site where the only-known baby woolly rhino specimen — dubbed Sasha — was excavated back in 2014.

Last year, the remains of two extinct cave lion cubs — 'Boris' and 'Sparta' — were found in the same district, close to a tributary of the remote Tirekhtyakh River.

'According to preliminary estimates, the rhino is three or four years old and is a very young individual,' said palaeontologist Albert Protopopov of the Academy of Sciences of the Sakha Republic.

'Most likely, it drowned in the river. The carcass is very well preserved,' he added.

'Among other things, part of the internal organs are preserved, which in the future will make it possible to study in more detail how the species ate and lived.'

Researchers also uncovered a horn near to the remains of the young Pleistocene creature,  the sex of which has not yet been determined.