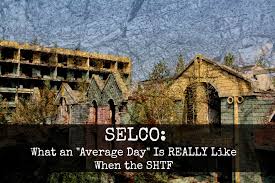 Did you ever think about how different your day to day life would be after an SHTF event? The little things we take for granted now, like making a meal, staying warm, or having water to drink and bathe in would suddenly become a whole lot more complicated.

Who better to tell us what that is like than Selco? For those who don't know, Selco spent a year in a city in Bosnia that was blockaded. During that year, he and the other residents lived without our normal amenities like heat, running water, electricity, and supplies that could be purchased at the stores.

I asked him some questions about daily life after the SHTF. I think you'll agree that his answers are eye-opening.

(Note: Selco's interviews are lightly edited for clarity, but I want to use his own words. The authenticity of his stories remains intact. For those of you who don't know of Selco, please note that English is his 4th language. Whiny grammar Nazi comments will be deleted. Comments complaining about my use of the word "Nazi" will be posted, however, so we can publicly mock them, and then the commenter will be banned forever for being a whiner.)

What time did you usually get up? What woke you?

A few weeks after the collapse came, all aspects of our normal life changed based on the new reality around us.

One aspect was "sleep cycle"- the time when we sleep and when we were awake and active.

One of the most basic rules that jumped in was that most of the activities got done during the night.

Some reasons for that were obvious, like danger from snipers. But also the other reason (maybe even more important) was that over time it becomes very important to hide your activities connected to gathering resources.

To explain it more, when you have a lot of people in a small area (city) and you have less resources that are needed for that number of people, the fact that you HAVE something (food, water medicines…) needs to be hidden from people who do not have that.