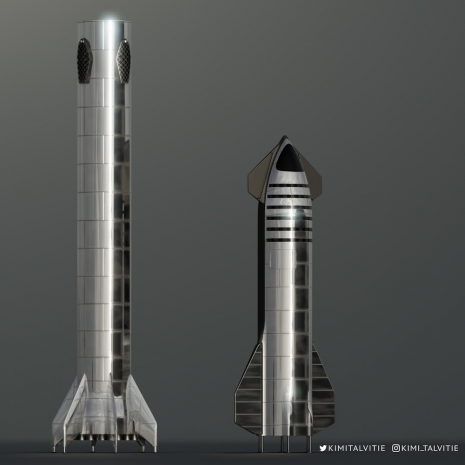 Such landings involve the rockets touching down, be it on a boat or a launch pad, using legs built into the rocket. But SpaceX CEO and founder Elon Musk has revealed different plans for the Falcon 9's bigger sibling, the Super Heavy, announcing the intention to have the launch tower arm catch the booster.

Rocket retrieval and reusability has become an important focus not just for SpaceX but for other space companies, such as Rocket Lab, which, in addition to retrieving its Electron rocket after an ocean splashdown, has used a helicopter to catch a booster in mid-air. The cost benefits for reusing massively expensive rockets are obvious, and SpaceX's goal of catching its Super Heavy booster is also rooted in cost savings, as well as reducing the weight of the rocket.

The announcement came, as they so often do, via Tweet, with Musk saying the idea would be for the launch tower arm to catch the Super Heavy booster, with its grid fins taking the load.

In a follow-up tweet Musk revealed this approach would not only save money and mass by removing the need for the booster to have legs for landing, but would also allow it to be immediately repositioned onto the launch mount for reuse. Musk added that this would allow the booster to be "ready to refly in under an hour," which sounds overly ambitious, but Musk and the SpaceX team can never be accused of aiming low.

The Super Heavy is designed as the first-stage SpaceX's Starship system, with the Starship spacecraft acting as the second stage for orbital and deep space missions. Suborbital test flights of the Starship on its own are already underway, with the first suborbital flight ending explosively earlier this month, and last week Musk said SpaceX plans to begin flight testing two prototype Super Heavy boosters in as soon as "a few months" at its development facility in Boca Chica, Texas.