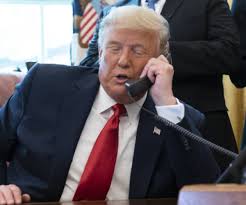 The Washington Post on Sunday released audio of a Saturday phone call between President Donald Trump and Georgia Secretary of State Brad Raffensperger in which the two can be heard discussing election results.

The Post initially released snippets of the hour-long call in which Trump can be heard discussing election results with Raffensperger and his lawyer Ryan Germany.

Raffensperger and Germany counter Trump's assertions largely with simple claims that the matters Trump raised have been investigated.

Trump insists he won Georgia's presidential election on Nov. 3 and claims widespread fraud deprived him of that victory.

The Washington Post claimed that in his talk with Raffensperger, Trump "repeatedly urged him to alter the outcome of the presidential vote in the state."

This claim is false.

The transcript of the call shows Trump demanding an honest accounting of the ballots, which he says would give him more than 11,000 votes.