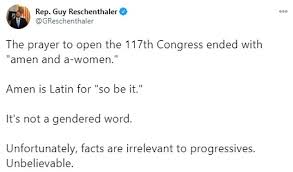 Brahma, and the god who supposedly goes by many names. He then concluded with the most asinine thing I have ever heard. He ended with "amen … and a-woman."

"We ask it in the name of the monotheistic god, Brahma, and god known by many names by many different faiths," Cleaver concluded.

"Amen" means "so be it," "it is so," or "verily." Jews and Christians have used the term to conclude prayers for thousands of years. The word appears 30 times in the Hebrew Bible and 52 times in the New Testament. There is no connection — absolutely none — between "amen" and "men," the far later English word for plural male individuals.

This truth is so basic that it honestly strains credulity that any educated Jew, Christian, or Muslim — much less a Methodist who served as a pastor for 37 years — would feel the need to make the term of assent "amen" inclusive by adding "a-woman." Yet Emanuel Cleaver, who served as the pastor at St. James United Methodist Church in Kansas City, Mo., from March 1972 to June 2009, did exactly that — and it seems he is proud of it.