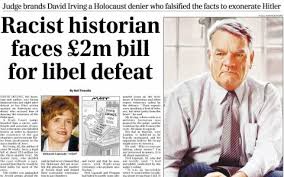 Ron Unz's "The Remarkable Historiography of David Irving" is a must-read and yet another object lesson for the need to question everything. Every grand sweeping narrative you take for granted (e.g., "Winston Churchill is a hero!") must be, to use a favorite phrase of the Left, interrogated.

I must confess I had no idea of the widespread praise Irving, as a WWII historian, has received from other renowned historians of the first order. I've only known the libel that Irving is a 'Holocaust denier' and a crank.

But Irving's books have received superlative praise from the likes of Hugh Trevor-Roper and Raul Hilberg, among others. Sir John Keegan, whose opinions of specific Irving theses naturally vacillated, nonetheless wrote that Irving "knows more than anyone alive about the German side of the Second World War", and claimed that Irving's book Hitler's Warwas "indispensable to anyone seeking to understand the war in the round." In the Times Literary Supplement, Keegan also wrote that "Two books in English stand out from the vast literature of the Second World War: Chester Wilmot's The Struggle for Europe, published in 1952 and David Irving's Hitler's War".

Also, little did I know that Kevin MacDonald testified at the infamous Irving trial.

Irving has made all of his books available in PDF format (for free) at his website.

The Greatest Thing the Roman Empire Ever Did Was Go Away