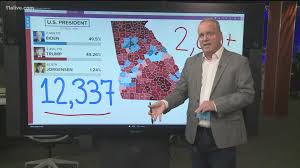 I had some frivolous fun with the post for a few hours, but these claims need checking before anyone takes them further. Tel raises the point that Putnam County is small and the alleged "flips" are very large. In Putnam there were only about 17,000 votes in total, so a flip of 6,000 votes is nearly a third of all votes. Further investigation suggests a flip of 17,000 votes in Dougherty County is about half the vote. In Dodge County, Georgia, there were only 8,000 voters in total. Bibb County is the largest county with around 70,000 voters — but even there a 12,173 vote flip is still 17% of the vote. These are big claims. Perhaps too big.

In light of that, until these flips get confirmed or explained in relation to the size of the county, lets stick with the many examples of voting irregularities that are easier to verify. The graphs and discussion are left here below in case someone can shed light either way on the situation.

The volunteers from the Data Integrity Group analyzed different datasets from the US election in Georgia and claim to have found at least 3 instances where the Trump voting totals went backwards, an impossible act in the known Democratic universe, and the Biden tally went up by the same amount at the same time, which all looks very suspicious.