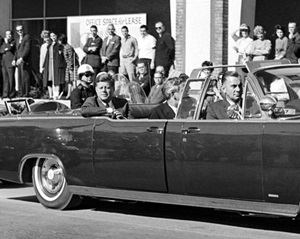 For many years, some people insisted that a vast conspiracy, not a lone gunman, masterminded the 1963 assassination of President John F. Kennedy near the grassy knoll in Dallas's Dealey Plaza. To these people, the complete absence of evidence proved the conspiracy's sophistication. They were demented.

Now, it stands to reason that mainstream journalists at the time of the Kennedy assassination would make that type of statement. That was a time when almost everyone placed undaunted faith in the U.S. national-security establishment and any official narrative it issued. This was especially true for conservative columnists, almost all of whom bought into the extreme anti-communist animus that was used to justify the Cold War and the conversion of the U.S. government to a national-security state. Of course, there was also Operation Mockingbird to consider. That was the CIA's successful secret operation to acquire assets within the U.S. mainstream press who could be relied upon to publish articles reflecting the views and narratives of the national-security establishment.

Thus, when a mainstream journalist in 1963 or even 1964, immediately after the issuance of the Warren Report, made a statement similar to that made by Will, it was somewhat understandable. At that time, while there were people who suspected that something was amiss in the assassination, most of the evidence pointing to a U.S. national-security regime-change operation was hidden from view because of the shroud of national-security secrecy that was immediately placed over the assassination.

But that was 1963. Today things are entirely different. Over the decades, the national-security state secrecy surrounding the assassination has been pierced, which has brought forth a large body of incriminating evidence pointing to a joint Pentagon-CIA operation to protect "national security" from a president whose policies, they believed, were leading to a communist victory in the Cold War and, ultimately, a communist takeover of the United States.

How Can A Global Conspiracy Work? - Questions For Corbett #074