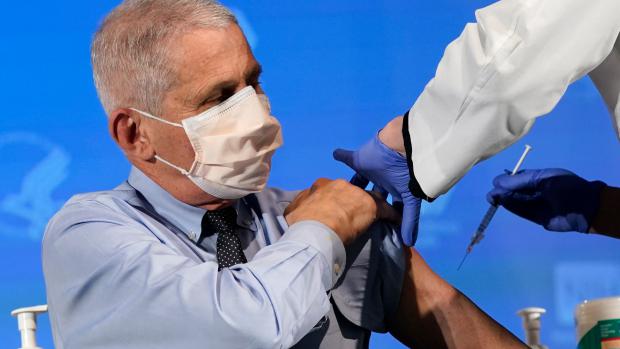 Dr Anthony Fauci has admitted the US should have done better with its COVID-19 vaccine rollout as a number of states finally make moves to start vaccinating the elderly after top health officials demanded they move quicker.

Only 5.4 million Americans have been vaccinated so far despite 17.2 million doses being shipped out nationwide.

The US has vaccinated just 1.7 percent of the population in three weeks, with about two-thirds of vaccine doses currently unused across the country.

Officials, both on a federal and state level, are struggling to explain why the train wreck rollout has been so slow.

While states are in charge of administering the shots locally, the federal government has still fallen short of the 20 million doses it promised to have available by the end of December.

Fauci on Wednesday admitted the US should have done better with the historic vaccination rollout - as cases, deaths and hospitalizations continue to surge to record highs across the country.

'Clearly, no excuses. We should have gotten 20 distributed and 20 into the arms of people - by 20, I mean 20 million,' Fauci said during a virtual appearance at the Economic Club of Washington.

'I think we have to wait for the first couple of weeks in January to make any determination as to what's gone wrong, if anything.'

Fauci said some of the delays could be a result of the vaccination program being in the initial stages and also because it started during the holiday season.

'Again, no excuses, but you can explain why you may not have gotten to the level you want. Now, not to make excuses, we should have done better. So, let me make that clear,' Fauci said.

'We should have done better, but I think we should wait until we get into maybe the second, or the third week in January, to see if we can now catch up with the original pace that was set.'