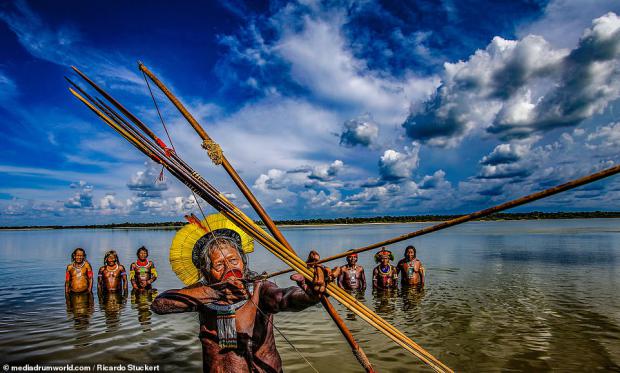 Incredible images have captured the indigenous tribes of Brazil who act as guardians of the quickly diminishing Amazon rainforest and fight off outsiders intent on destroying it.

One stunning photo showed an 89-year-old tribe chief hunting for fish with a bow and arrow in a shallow bay.

Another captured a beautiful indigenous woman swimming underwater in a crystal clear river in the Chapada Imperial ecological sanctuary.

Photographer Ricardo Stuckert, 50, from Brasília, Brazil, took the spectacular images across different regions of his home country where the Brazilian Indians live including the states of Acre, Amazonas, Bahia, and Alagoas.

Here, the indigenous people develop sustainable management projects, reforest devastated areas and even fight off outsiders who cut down the forest for financial gain.

With 2020 witnessing some of the most devastating forest fires the Amazon has ever seen, the very existence of many of the indigenous people is under threat, since their land is the basis of their survival.

Ricardo hopes that his work will draw attention to the ongoing difficulties the indigenous people face through no fault of their own.

Ricardo first met the indigenous tribes people in 1997 whilst photographing in Yanomami village on the border between Brazil and Venezuela.

Ricardo's latest images contribute to his 'Brazilian Indians Project' which aims to highlight the importance of protecting the indigenous people of Brazil as well as show that harmony can exist between nature and man.

'I have always been fascinated by indigenous culture,' Ricardo said.

Free NY: Unelected Governor Hochul Governor & Her Dept. of Health Made An Illegal...