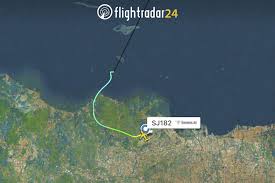 The airline's CEO Jefferson Irwin Jauwena said the plane was delayed 30 minutes before it could take off due to thunderstorms.

He noted the plane was in good condition.

INDONESIAN NAVY: LOCATION COORDINATE OF MISSING SRIWIJAYA PLANE HAS BEEN

"We are aware of media reports from Jakarta, and are closely monitoring the situation. We are working to gather more information," Leong said.

The local news outlet also posted a picture of first responders holding a "suspected" part of the aircraft.

Big Tech Is Pushing States to Pass Privacy Laws, and Yes, You Should Be Suspicious